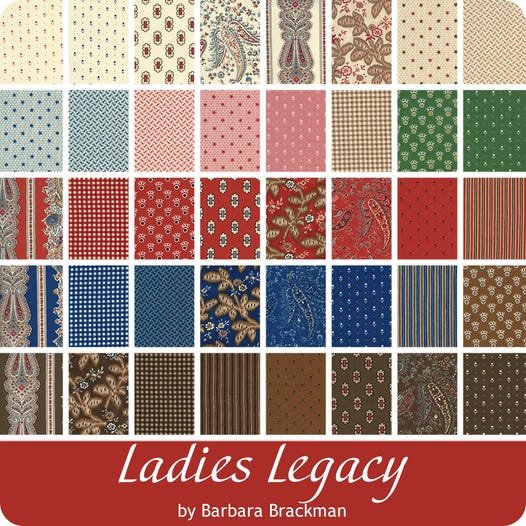 Ladies' Legacy is a beautiful collection from Barbara Brackman that was inspired by ... a quilt. The quilt was stitched by the members of the Sanitary Commission during the Civil War. "The army felt no obligation to care for you if you were wounded," says Barbara. "So, following Florence Nightingale's example in Europe during the Crimean War, women in the US formed a Sanitary Commission which was kind of like the Red Cross. They were involved in building, furnishing and staffing city and field hospitals." The commission was headquartered in New York City, in a building that was part of Cooper Union, an art school founded in 1859 by Peter Cooper. The school gave a free education to men and women alike. Peter's wife Sarah Bedell Cooper was a founding member of the Sanitary Commission. The New York branch was called the Women's Central Relief Association. In addition to raising funds for hospitals, the Sanitary Commission created rehabilitation homes for wounded troops and taverns where weary soilders could stop for a rest and a non-alcoholic beverage. "Men were at the top of the organization, of course, and many did a lot of good," says Barbara. "But women were working at the grassroots level. They did so much - it makes you proud to be a woman. Every little town had a Sanitary Commission branch." Life in a battlefield hospital was hard on quilts and of those many thousands, only about 20 are known to still exist in museums and private collections. When Barbara saw one for sale in 2019, she couldn't resist. Researching the quilt, which she estimates dates to c. 1865, has been a tremendous please for Barbara. Its size (54" x 88") fits with those requested by the Sanitary Commission. It was embroidered "School of Design Engraving Class, Cooper Union" indicating it was likely made by the women who were studying there to become magazine illustrators. Barbara choose to name each of the prints in her Ladies' Legacy collection for a volunteer who worked during the war in the Women's Central Relief offices in New York which sent out 34,000 quilts and blankets. "The fabrics come directly from this wonderful quilt," she says.